The FBI’s “Most Wanted Terrorists” web page does not state that Bin Laden is wanted for the September 11, 2001 attacks on the World Trade Center and the Pentagon. 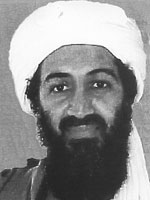 The FBI page states: “Usama Bin Laden is wanted in connection with the August 7, 1998, bombings of the United States Embassies in Dar es Salaam, Tanzania, and Nairobi, Kenya. These attacks killed over 200 people. In addition, Bin Laden is a suspect in other terrorist attacks throughout the world.”

When asked why there is no mention of 9/11 on the FBI’s web page, Rex Tomb, the FBI’s Chief of Investigative Publicity, is reported to have said, “The reason why 9/11 is not mentioned on Usama Bin Laden’s Most Wanted page is because the FBI has no hard evidence connecting Bin Laden to 9/11.”

In the months leading up to the Septmber 11, 2001 attack, it is reported, the Taliban “outlined various ways bin Laden could be dealt with. He could be turned over to the EU, killed by the Taliban, or made available as a target for Cruise missiles.” The Bush administration did not accept the Taliban’s offer.

“On September 20, 2001,” according to the Guardian, “the Taliban offered to hand Osama bin Laden to a neutral Islamic country for trial if the US presented them with evidence that he was responsible for the attacks on New York and Washington. The US rejected the offer.”

On September 23, 2001 the BBC reported that four of the hijack “suspects” – Waleed Al Shehri, Abdulaziz Al Omari, Saeed Alghamdi, and possibly Khalid Al Midhar – were alive, and that FBI Director Robert Mueller acknowledged “the identity of several of the suicide hijackers is in doubt.”

Bin Laden, in a September 28, 2001 interview with the Pakistani newspaper Ummat, is reported to have said: “I am not involved in the 11 September attacks in the United States.”

Skeptics dismiss the video tape “found in a house in Jalalabad”, Afghanistan, which allegedly shows Bin Laden confessing to the September 11 attacks. In a December 20, 2001, broadcast by German TV channel Das Erste “two independent translators and an expert on oriental studies found the White House’s translation not only to be inaccurate, but manipulative.”

FBI Director Robert Mueller, in a speech at the Commonwealth Club on April 19, 2002, said: “In our investigation, we have not uncovered a single piece of paper – either here in the United States, or in the treasure trove of information that has turned up in Afghanistan and elsewhere – that mentioned any aspect of the September 11 plot.”

In fact there are no Arab names on the partial list of passengers on the 9/11 flights. A final list is not available.

Yet on September 12, 2001 ABC News reported that “investigators have identified all the hijackers”. Among those identified was “Satan Suqami, a Saudi national on American Airlines Flight 11, whose passport was recovered in the rubble.”

The evidence against Bin Laden, promised by Secretary of State Colin Powell on September 23, 2001, has yet to be made available to the public.

Bin Laden is the “prime suspect” in the September 11 attacks, said President Bush on September 17, 2001, and he pledged to capture him “dead or alive.”